This week on Orphan Black … Rachel takes extreme action to get what she wants. Helena deals with a burning issue. And Donnie grows a pair. 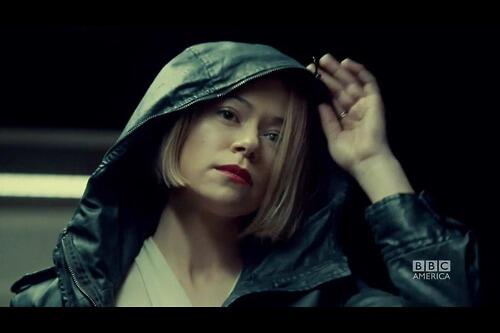 Season two’s penultimate episode focusses on three main strands, each of which has its own shocking ending.

Sisters and a wannabe mother

The episode’s main storyline revolves around Sarah and Rachel. The former shows how far she, Cosima and Alison have bonded. Sarah talks about the dying Cosima as “my sister”, and is even willing to allow Kira to volunteer to provide the bone marrow transplant that could save her life, which she does without hesitation.

Rachel appoints Delphine interim director of Dyad and promptly dupes her, ‘accidentally’ leaving her laptop open to cast suspicion on Mrs S‘s associate Benjamin. This creates enough of a diversion to draw Sarah away from Kira and for Rachel to impersonate her well enough to fool Mrs S and Felix, knocking the latter out with a hypodermic needle in the neck, and snatch Kira.

It’s hard to know exactly what’s going on in Rachel’s head any more. We know she’s angry at learning she is barren by design and that Sarah is special by accident, a feeling which is worsened by Marian‘s specific interest in Sarah.

As she watches old video footage of the younger version of her with the Duncans, she swaps between almost maniacal laughter and tears without appearing to even notice. Long repressed emotions are starting to rush to the surface. It’s difficult to know how much of the rational Rachel we have come to know remains. Is she now unstable? Is snatching Kira the act of a desperate woman, or is there method to the madness? It’s certainly out of character for her to resort to doing her own dirty work, although with Aldous Leekie dead and Paul missing there’s no one left to do it for her.

Tatiana Maslany‘s performance as Rachel-as-Sarah is layered with subtle hints of the deception at hand – the way the scene is laid out is designed to make us think it’s the real Sarah initially, even though we have seen Rachel preparing to impersonate Sarah. She does well, although her accent and speech are a little too clipped and businesslike – would Sarah demand that an elevator be secured, and wouldn’t she also be more likely to say lift instead?

While Sarah (the con artist) and Alison (the am-dram actress) have plausible explanations for their proficiency at stepping into each other’s shoes, for Rachel to successfully fool both Mrs S and Felix requires a fairly major suspension of disbelief, but it’s all done so slickly we can let this one pass. The moment where she jabs the needle into Felix’s neck is a genuine heart-in-mouth shock.

What is Rachel’s endgame now? Is she trying to claim Kira as her own? Is she planning to use her for research purposes? Or does she have some other reason?

Razing the Proletheans to the ground

Having returned to the Proletheans, Helena allows Henrik to impregnate her with her fertilised embryos, only to learn from Gracie that the father is Henrik himself and that the two of them are just part of a herd of ‘brood-mares’ intended to raise a mass of clone babies.

Helena decides to leave and return to Sarah, telling Gracie that she doesn’t have to have her babies if she doesn’t want to. After a violent confrontation with Henrik, Helena urges Gracie and Mark to run while she exacts her revenge by inseminating Henrik before burning down the farm. (Apparently a scene where she ushers the children away to safety first was cut for time.)

Is this the end for the Proletheans? And will Helena, who wants nothing more than to be part of a family, have the opportunity to see her babies through to full term in peace? She was denied family and any kind of loving relationship by the nuns in the convent, and then the Proletheans’ Happy Families facade was quickly exposed by midwife Amelia‘s rough treatment of a young girl. Sarah remains the only true family she has.

Getting down and dirty

I have never been more attracted to you than I am right now.

Finally, Alison and Donnie dispose of Leekie’s dead body under the floor of their garage, culminating in the prim and proper housewife requesting dirty sex up against the freezer.

Initially it’s the ever-practical, hard-as-nails Alison who does all the dirty work, cleaning the car and taking over the jackhammer from her husband, who spends most of his time gawking squeamishly.

But when Vic turns up to spy on them, it’s Donnie who takes the initiative. He puts a gun to his head (remembering to put the safety on this time) and marches him out to Deangelis‘ surveillance van, where he calls her bluff and threatens to expose her, warning her that “You don’t want to know what we know.”

At last, Donnie stops being such a wet blanket. And I had to chuckle at Vic muttering “God, I hate this garage” – a reference to Paul impaling him with a nail gun in last season’s Variations Under Domestication.

After completing Leekie’s burial, Donnie draws an anonymous heart in the drying concrete, leading to Alison jumping him. It looks like matching killings were all that was needed in terms of marriage counselling for our suburban Bonnie and Clyde.

It’s lovely to see Donnie finally grow from a stooge into a proper character, and the sudden about-turn in the Hendrixes’ relationship which seemed damaged beyond repair only two episodes ago. Their happiness will surely soon be disrupted, however.

2.1 Nature Under Constraint and Vexed

2.3 Mingling Its Own Nature With it

2.4 Governed As It Were by Chance

2.6 To Hound Nature in Her Wanderings

2.7 Knowledge of Causes, and Secret Motion of Things

2.8 Variable and Full of Perturbation

Everything you need to know about what’s happened so far

Copyright © 2021 Create a free website or blog at WordPress.com.