After yet another Orphan Black episode with more twists than a corkscrew, it appears our favourite seestras can’t trust anybody, including each other.

This was another storming episode of a series which, week after week, skillfully ramps up the stakes and delivers one shocking revelation after another with a combination of smart, intricate scripts and the consistent brilliance of Tatiana Maslany. 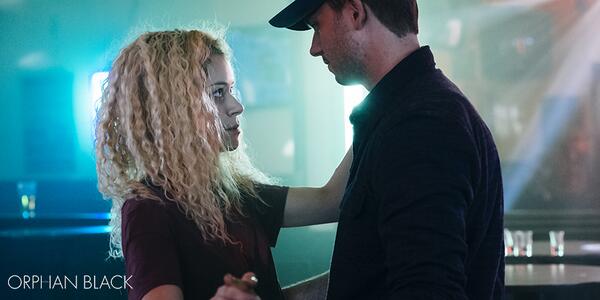 Helena enjoys her day out in the way that only Helena can (Image: BBC America)

On their road trip to Cold River, Helena‘s car-aoke brings a smile to Sarah‘s face.

The ongoing theme of the pair being opposites recurs as they sleep facing head to toe, mirroring the Chinese yin and yang symbols.

But just when it seems they are finally bonding and finding common ground, a bored Helena ignores Sarah’s order to stay put, flirts with a local in a bar and gets in a fight. She is arrested and convinced by Gracie to return to the Proletheans to see her test tube ‘babies’.

Who can Sarah trust?

Sarah is not only betrayed by Helena, but everyone she comes into contact with seems untrustworthy – or at the very least not what they seem. Her Cold River investigations lead her to Ethan Duncan‘s hideaway, where she is greeted by a gun-wielding Mrs S.

Duncan turns out to be an innocent researcher who was exploited by others. He and his wife Susan were part of a military cloning experiment which was taken over by Dyad. The Neolutionists within Dyad took Rachel away from them and he’s been in hiding ever since Susan was killed – by Aldous Leekie.

Meanwhile Mrs S finds Paul, who has been tracking Sarah on Rachel’s orders, and offers a potential alliance. Will he switch allegiance again?

Alison is shocked to encounter newly converted Buddhist Vic in rehab. The pair bond over basketball and she takes him into her confidence.

However, his presence is no coincidence – he’s been planted by Angie Deangelis to find out more about Alison. Is her role in Aynsley’s death about to be discovered?

Time’s runnng out for Cosima

Delphine continues to treat an increasingly ill Cosima. She has recruited Cosima’s former lab partner Scott, who has worked out the clones’ existence but not who they are.

He discovers that the stem cells used in Leekie’s experimental treatment are from a female relative of one of the clones. But who could this be? Kira? Or someone else we have yet to meet?

A race against time

So who can the clones trust? On the evidence of this and previous episodes, the list starts with Felix and Art – who are now working together on their own investigation – and pretty much ends there.

There’s a growing sense that everyone connected to the clones has an agenda of some sort but it is becoming increasingly unclear exactly who’s on whose side.

The noose is drawing ever tighter around the clones’ necks. Can they piece the puzzle together quickly enough? For all of them, in particular Cosima, time is running out.

2.1 Nature Under Constraint and Vexed

2.3 Mingling Its Own Nature With it

2.4 Governed As It Were by Chance

Everything you need to know about what’s happened so far